In the first quarter of 2021, Germany experienced a strong decline in GDP relative to both 2020- Q4 and 2020-Q1. The strict national containment measures taken to curb the second wave of the COVID-19 pandemic contributed to a drop in economic activity, visible from the sharp decline in consumption. To alleviate the negative effects of the pandemic, the government raised public spending by 2:6% with respect to the same period of the previous year. Import and exports increased in comparison to 2020-Q4 but did not go back to pre-crisis levels. According to the OECD economic outlook, GDP is expected to grow from the second quarter of the year and to stabilize at an annual growth rate of 4-4.5% from 2022. The unemployment rate is almost unchanged relative to the previous quarter and is about 1 percentage point higher than in 2020-Q1, suggesting a modest impact of the pandemic on the German labour market. The OECD predicts that unemployment will gradually decline, reaching its pre-crisis levels by the end of 2022. For the first time since the beginning of the pandemic, the inflation rate is above 1 percent. 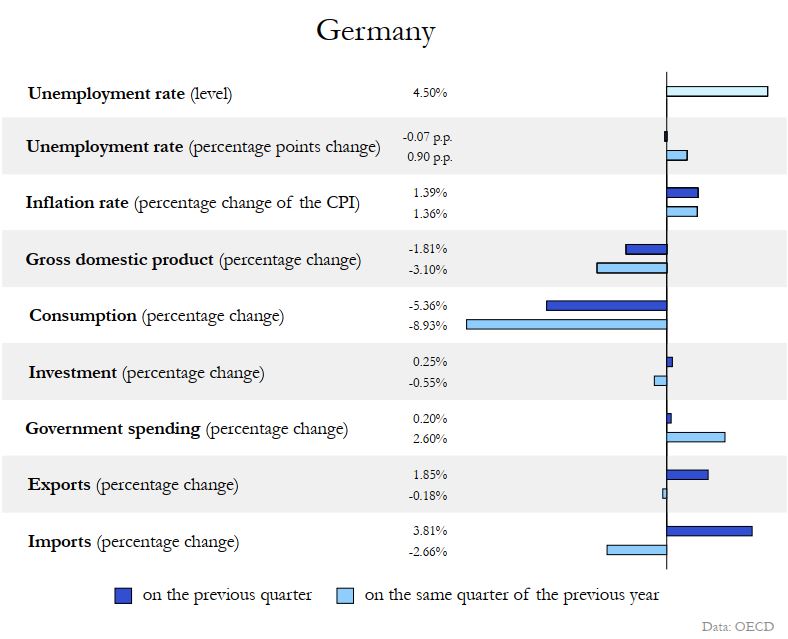