As national restrictions to fight the COVID-19 pandemic crisis were progressively lifted in the first half of the year, OECD countries experienced a rebound in economic growth. In 2021-Q2, average GDP grew by 1.7 percent relative to 2021-Q1 and by 13.1 percent relative to 2020-Q2. All components of GPD increased markedly. The average unemployment rate was at 6.57 percent and did not change relative to the previous quarter. It is, however, 2 percentage points lower than in the same quarter of the previous year. There is a moderate inflation rate, reflecting the economic recovery, with prices having increased by 1.65 percent relative to the previous quarter and 3.72 percent relative to the same period of the previous year. The latter follows from the high inflation rate in the United States. According to the OECD economic outlook, GDP is expected to continuously grow and to stabilize at an annual growth rate of about 5.0 percent in 2022, while unemployment is going to gradually decline, reaching 5.7 percent by the end of next year. Inflation is expected to persist throughout the following quarters, exceeding 3 percent towards the end of 2021, and to stabilize at 2.3 percent in 2022. 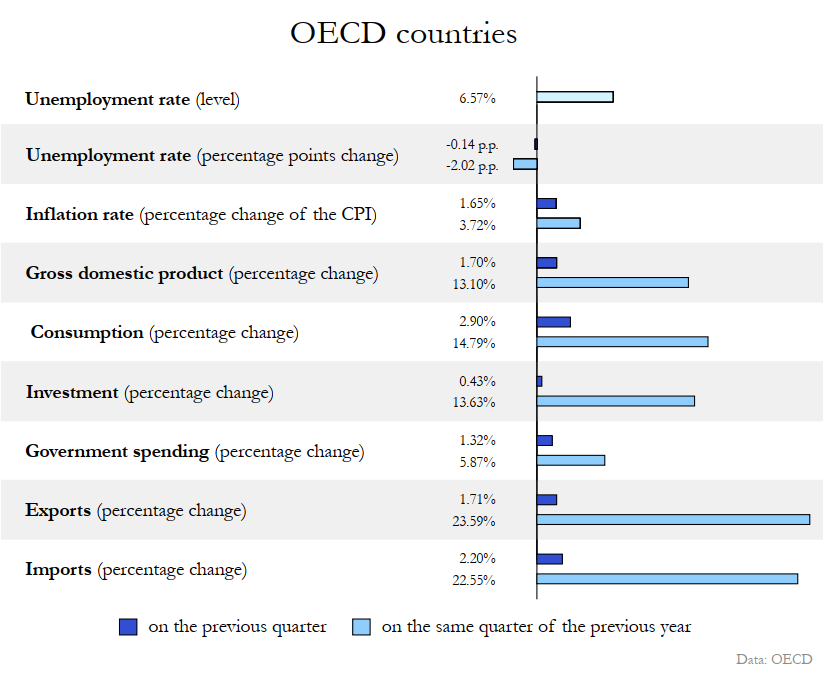